The winter season of 2020 is in full throttle! The youngest of SC Ašais members on the 19th of February tested their limits in Valkas sports schools' organized athletics indoor biathlon. Roberts Cercins 2nd (1 point to 1st place!!!). Stella Paltiņa also second amongst U14 girls. It is also her first time running under 1:50 in 600m (1:49,6)! However the older runners of club started in Rīgas U18 championship. On the first race day Renāte Beļājeva got bronze in the 400m sprint with a new PB and a new club record for girls in this distance. On the second race day Renāte 5th in 200m almost qualifying for final runs. With a new kind of speed - II sports class spped in 800m - Roberts Glazers got 5th place and set a new PB with very tough competitors. Next up - Elza Niklase.  On the weekend she will be competing in U16 championship! Some photos - here!

Roberts Glazers gets bronze in his first U18 championship!

February is the time of championships here and champioinships there! Great news from Latvias' U18 championship in Kuldīga. Now Roberts, in addition to Stellas' Paltiņas' bronze in LV championship, has gotten a bronze in the 1500m distance. He also maneged to improve his Pb by two seconds! Maybe not as hoped for, nonetheless with honor, started Renāte Beļājevain her first U18 championship. From 30 competitors in the long sprint race, Renāte got 6th place in the 300m distance, setting a new PB and a new club record! Both had to compete as the youngest runners in their respective age group, which means they competed with 1 year older athletes. A few photos - here!

In the evening of February 4th, Artis set off to our beloved Estonia, where in Tartu manēža for the 8th time occured the traditional Martin Kutmani competition in athletics. In a very tough competition with ahletes from Estonia, Lithuania, Ukraine and Byelorussia, Artis got 6th placewith a new PB and club record in 600m - 1:24,93! Need to menntion, that the result of the winner was 1:18,97! After this competition, Artis' result indoors is third best in U23 age group and 4th best amongst mens' rating. Slowly approaching is Latvian championship indoors. There the most desired goal will be breaking the 2 minute mark in 800m. There is some time left to train. It will be fun!

Youngest Ašais runner steps on country's most important pedestal in her first championship! 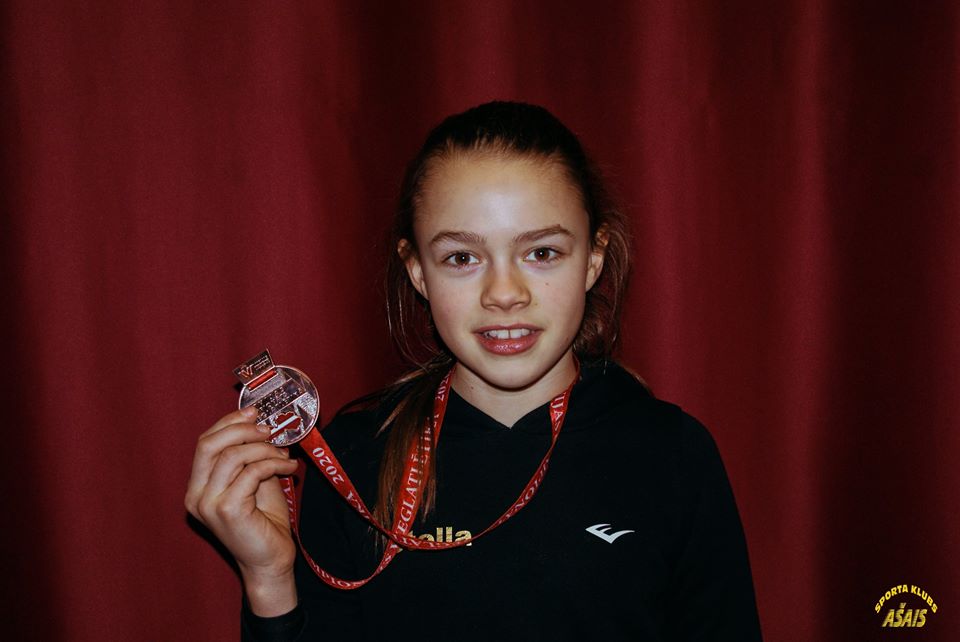 The crazy month of February is here! For others maybe it is not that crazy, but for Ašais it definitely is. It is the time of Latvian championships! Isn't it amazing that the month of championships has started with something this amazing?!? In the elderly Rīgas manege occured the U14 Latvian championship. We are truly happy, that our young lady Stella Paltiņa in her first Latvian championship ever stepped on the country's most important athletics pedestal, getting 3rd place with a new PB overall! Also Stella was only 0,16 seconds behind 2nd place! furthermore, she was a year younger than her competitors!!! Unfortunately, psychology got the best of our second U14 athlete Roberts Cercins. Psychology got him ruthlessly...Experience. Next on the queens' stage will set off U18 age groups' runners Roberts Glazers and Renāte Beļājeva!  Photos - here!

Manager of ENGLISH version - Kārlis Dieviņš
Sports club Ašais 2020
Use of photos - coordinate.
SC Ašais athlete photo and video use is coordinated with youngster parents!
People visible in photos and videos, who are not athletes of SC Ašais, are there by accident. Photos taken only in public events.